At the June meeting, the following draft assessment materials were discussed:

IRIS hosts public science meetings to allow the public the opportunity to provide input and participate in discussions about the draft IRIS assessment for tert-butanol and related materials to the BaP assessment [see Meeting Materials tabs].

The meeting was held at the EPA Conference Center at 2777 South Crystal Drive, Arlington, Virginia 22202. The meeting was also available by webinar/teleconference for remote participants.

In 2013, the IRIS Program began to host public science meetings to seek input from the public and to foster scientific discussion of draft materials for IRIS assessments under development.

For this public comment draft, the IRIS Program has identified two science topics where further public discussion will aid in revising the draft assessment and submitting it for peer review.

The public is invited to provide written comments on these and other science topics specific to this draft assessment. In addition, there will be an opportunity to provide oral comments during a separate session at the meeting.

Provide comments on the key science topics in the tert-butanol docket at EPA-HQ-ORD-2013-0111.

Materials previously released for this assessment may be found on the tert-butanol chemical landing page.

In April 2016, the EPA’s Science Advisory Board Chemical Assessment Advisory Committee (SAB CAAC) released their peer-review advice on the 2014 draft IRIS Benzo[a]pyrene assessment. Their report made several recommendations, including that the extrapolation from mice to humans be supported by a more coherent, logical structure. They also recommended that skin cancer risk be modeled as a function of absorbed dose rather than applied dose of benzo[a]pyrene.

The IRIS Program is initiating a public science discussion on this topic in order to obtain a broad range of scientific perspectives on how to approach this problem.

The challenge of estimating the potential risk of human skin cancer from dermal exposure to benzo[a]pyrene can be broken down into several steps: 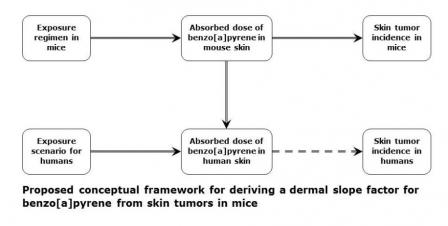 In 2013, the IRIS Program began to host public science meetings to seek input from the public and to foster scientific discussion of draft materials for IRIS assessments under development.

The IRIS Program is proposing three science topics where further public discussion will aid in revising its approach to estimating the risk for skin cancer following dermal exposure to benzo[a]pyrene. In the future, the revised approach will be submitted for public comment and peer review.

Provide comments on the key science topics in the BaP docket at EPA-HQ-ORD-2011-0391.

Related materials may be found on the benzo[a]pyrene chemical landing page.