International Actions for Reducing Mercury Emissions and Use

Looking for information about the Mercury Export Ban?

By federal law, it is now illegal to export elemental mercury from the United States. For more information, see Questions and Answers about the Mercury Export Ban Act of 2008.

Mercury is a potent neurotoxicant that negatively impacts human health and the environment around the world. Mercury pollution is transported globally in the atmosphere, so mercury emitted far away affects people and ecosystems in the United States.
The U.S. engages its international partners, multilaterally and bilaterally, to address key mercury issues such as:

In 2013, the United States joined the Minamata Convention on Mercury, a new multilateral environmental agreement that addresses specific human activities which are contributing to widespread mercury pollution. Implementation of this agreement will help reduce global mercury pollution over the coming decades. 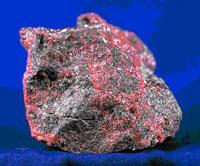 Cinnabar (mercury sulfide), the ore from which mercury is mined. Photo: U.S. Department of State.

As called for by United Nations Environment Program Governing Council Decision 23/9 IV of February 2005, a Global Mercury Partnership Exit was established to achieve reductions in use and emissions of mercury globally. The United States was a catalyst in the formation of the Partnership, and continues to participate actively. The Partnership is divided into seven areas with the following leads or co-leads:
Learn more:

Mercury in the Arctic

The U.S. has strengthened capacity building and technical cooperation programs implemented in the context of the Arctic Contaminants Action Plan (ACAP) and the Arctic Monitoring and Assessment Program (AMAP). ACAP and AMAP are bodies of the Arctic Council, an intergovernmental forum whose members include Canada, Russia, Norway, Denmark, Iceland, the United States, Sweden and Finland. EPA co-chairs the Mercury Project Steering Group under ACAP. EPA also:
Learn More:

The U.S. has developed bilateral mercury cooperation programs to foster assessment and sector-specific improvements in a number of countries including China and Indonesia.

In June 1998, under the auspices of the United Nations Economic Commission for Europe (UNECE), the Executive Body of the Convention on Long-range Transboundary Air Pollution Protocol on Heavy Metals Exit adopted the Protocol on Heavy Metals. This legally-binding agreement went into effect in December 2003. The United States is a party to this agreement. The Protocol targets three heavy metals – cadmium, lead and mercury. The Protocol:
In addition, the Task Force on Hemispheric Transport of Air Pollution (HTAP) was established under the Convention in 2004 to develop a fuller understanding of intercontinental transport of air pollution in the Northern Hemisphere, including mercury. The Task Force, co-chaired by the U.S. and the European Union, developed a 2010 assessment report (HTAP 2010), which includes a technical assessment of the state-of-science on intercontinental transport of mercury (Part B). Exit

The Strategy established a workgroup of U.S. and Canadian federal, state and local government officials, industry, and environmental groups, who shared information about cost-effective mercury reduction approaches. The Strategy was successful in gaining commitments for voluntary mercury reduction from the chlor-alkali industry, which committed to reduce its mercury use by 50% (actually achieving more than 95%); from the American Hospital Association for the virtual elimination of mercury from hospital waste, and from northwest Indiana steel mills; who inventoried their mercury-containing equipment and reduced it by more than 80%. The workgroup has ceased its activity, having achieved its interim reduction goals.

Under the auspices of the North American Commission for Environmental Cooperation (CEC) Exit, the U.S., Canada, and Mexico developed a North American Regional Action Plan (NARAP) on Mercury Exit (finalized in 2000). The goal of this ten-year Plan was to reduce anthropogenic mercury releases within North America through tri-national and national initiatives in the three countries.
The Mercury NARAP contained provisions on risk management approaches to address mercury in air emissions, industrial processes and operations, products and waste. It also described activities related to research, monitoring, modeling, inventories and communication.

In 1998, the New England Governors and Eastern Canadian Premiers adopted a Regional Mercury Action Plan for the Northeast U.S. and Eastern Canada. This plan established a long term regional goal of virtually eliminating the discharge of mercury from human sources into the environment. It also established goals of 50% reduction of mercury emissions by 2003 (which has been met) and 75% reduction by 2010. A preliminary assessment completed in 2010 indicated that the binational region has probably achieved this 75 percent reduction goal for mercury air emissions.