Where is the 2015 Definition of Solid Waste Rule in Effect?

EPA encourages states to develop and run their own hazardous waste programs as an alternative to direct EPA management. The 2015 Definition of Solid Waste (DSW) rule went into effect immediately in states, territories, and tribes that are not RCRA-authorized, including Iowa and Alaska.

State adoption of the 2015 DSW final rule is strongly encouraged, and some parts of the rule, including the new definition of legitimate recycling found at 40 CFR 260.43, are mandatory and will eventually be adopted by all the states.

Note that one state (Idaho) is currently authorized for a 2008 version of the DSW rule that includes exclusions similar to the 2015 exclusions found at 40 CFR 261.4(a)(23) and (24). Because these 2008 DSW exclusions are less stringent than their 2015 counterparts, Idaho will need to revise its program to meet the 2015 standards. Until they complete this process, the 2008 rule will remain in effect in that state.

To help companies follow the regulations in their state, both a map and an alphabetical list of states and U.S. territories are given below. The map shows which states:

The chart below the map lists the state or U.S. territory, a link to the state's regulations if applicable, and whether the state has adopted or been authorized for the rule. 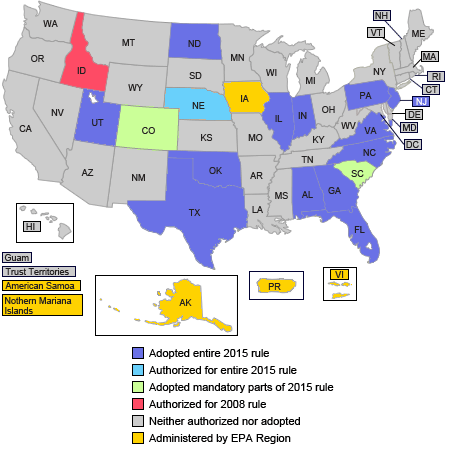 Map of states that have adopted the DSW Rule