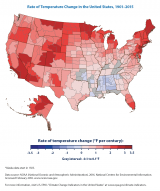 This figure shows how annual average air temperatures have changed in different parts of the United States since the early 20th century (since 1901 for the contiguous 48 states and 1925 for Alaska). Source: US EPA (2016).Climate change and the heat island effect interact in two important ways. First, our warming climate will increase already higher temperatures in heat island areas. Second, cooling strategies to reduce heat islands can help communities adapt to the impacts of climate change as well as lower the greenhouse gas emissions that cause climate change .

Percentage of the land area of the contiguous 48 states with unusually hot daily high and low temperatures during the months of June, July, and August, 1910-2015. Source: US EPA (2016)

Over the last 20 years, extreme summer heat has become more frequent across the contiguous 48 states, 1 with western regions setting records for numbers of events in the 2000s. 2 The interaction of rising temperatures, more heat waves, and the heat island effect will be increasingly harmful to people’s health and the air and water quality in our communities.

When people are exposed to extreme heat, they can suffer from potentially deadly illnesses, such as heat exhaustion and heat stroke. Older adults, young children, low-income populations, people who work outdoors, and people in poor health are the most vulnerable to these impacts. Many people die from extreme heat. Between 1979 and 2010, heat was recorded as the underlying or contributing cause of death for nearly 8,000 Americans, peaking in 2006, a year of widespread heat waves and the second-hottest year on record in the contiguous 48 states. 1 The actual number of heat-related deaths may be much higher since the cause of death may not be reported as "heat-related" on death certificates.

Older adults are among the most vulnerable to extreme heat events. Many physiological, psychological, and socioeconomic factors contribute to this danger. Older adults are more likely to be in poor health, to be less mobile and more isolated, to be more sensitive to high heat, and to live on reduced incomes. 3

Young children are another group at risk of illness. Children tend to be more susceptible to extreme heat due to their small size and other characteristics. Children’s more rapid breathing rates relative to body size, time spent outdoors, and their developing respiratory systems raise their chances of aggravated asthma and other lung diseases caused by ozone air pollution and smog, which usually increases during heat waves. 4

Low-income populations can also be in danger of heat-related illnesses due to poor housing conditions, including lack of air conditioning and small living spaces, and inadequate resources to find alternative shelter during a heat wave. 4

People who spend their working hours outdoors are more prone to conditions such as heat exhaustion and heat stroke. They have higher exposures to ozone air pollution and heat stress, especially if work tasks involve heavy exertion.

People in poor health, including people with chronic conditions, disabilities or mobility constraints, and those taking certain medications, are also vulnerable to extreme temperatures. People with diabetes, physical impairments, and cognitive deficits are especially at risk during heat waves. 4

In a warmer climate, Americans would use more electricity for air conditioning and less fuel for heating. If the nation's climate warms by 1.8°F (1°C), the demand for electricity used for cooling would increase by about 5-20%, while the demand for electricity used for heating would decrease by 3-15%. 5 Current evidence shows that in recent decades heating demand in the United States has generally decreased in the north and west, and cooling demand has generally increased in the southwest. 1 With the heat island effect compounding the warming from climate change, cities will likely require more electricity for air conditioning than surrounding areas.

The need for electricity, especially during heat waves, could stress our electricity infrastructure, resulting in more frequent or prolonged power outages, or a need for new system investments. 5 For example, based on a 6.3 to 9°F temperature increase, climate change could increase the need for additional generating capacity by roughly 10-20% by 2050. This would cost hundreds of billions of dollars. 6

Using more electricity and adding more capacity for its production will likely result in more emissions of air pollution and the greenhouse gases that cause climate change. Therefore, any efforts to reduce the heat island effect can also help mitigate climate change.

The Benefits of Managing the Heat Island Effect

Efforts to reduce the heat island effect, mitigate climate change, and adapt to climate change impacts often interact with each other in complex ways.

In some cases, climate change adaptation or mitigation strategies might conflict with heat island reduction efforts. For example, any adaptation effort that results in replacement of vegetative cover with impermeable surfaces, such as hardening coastal infrastructure to protect against rising sea levels, could increase the heat island effect. However, communities can help minimize such negative outcomes by incorporating cooling strategies into overall climate action planning (mitigation and adaptation).