Since 1993, the EPA has made the National Listing of Fish Advisories (NLFA) available to let people know about locally-issued fish advisories and safe eating guidelines. States, territories (called "states"), and tribes provide this information to the EPA every year.

Until 2004, we published a summary of the most current information in the NLFA every year. In 2005, the EPA decided to do this every two years because changes from year to year had been very small.  However, this year's summary describes one year's worth of data, the fish advisory data for 2011.

In addition to providing a central location where people can find data about fish advisories, the EPA produces materials to help people understand the risks of eating contaminated fish and the benefits of eating fish as part of a healthy diet.

Basic Information about Fish Advisories in the United States 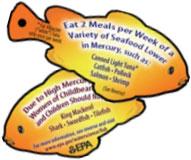 States may issue an advisory for everyone or for groups like pregnant women, nursing mothers, and children. In recent years, states have been using statewide advisories to warn about risks from widespread contamination. In our summaries, they count as one advisory.

In contrast, states also issue safe eating guidelines to let people know that fish from specific waterbodies are safe to eat. Differences in the way states monitor, make decisions, and communicate to citizens make it hard to do comparisons or establish national trends. 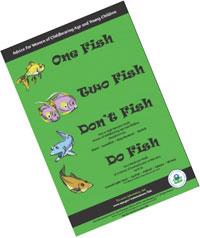 Each statewide advisory counts as one advisory in our totals, so looking at the number of advisories may be a little misleading. That's why we also use total lake acres and total river miles subject to advisories to get a sense of their extent across the country.

For 2011, the NLFA showed that states issued 223 new fish advisories. The 2011 total of 4,821 advisories covers 42% of the Nation's total lake acreage and 36% of the nation's total river miles. To get more details on the waters under advisory refer to the technical fact sheet and questions and answers.

Ninety–four percent of all advisories in effect in 2011 involved five bioaccumulative chemical contaminants: mercury, PCBs, chlordane, dioxins, and DDT. These contaminants accumulate in fish tissue at concentrations many times higher than concentrations in the water and can persist for years in sediments, where bottom-dwelling creatures eat them and pass them to larger fish.

Chlordane use was banned in the United States in 1988, and this contaminant continues to degrade in the environment. There were no new fish consumption advisories issued for chlordane in 2011.

Dioxin advisories increase from 128 in 2010 to 129 in 2011. The geographic area covered by dioxin advisories is extremely small, in part because of the high cost of analysis and the location of facilities that release dioxin.

Although the use of DDT has been banned since 1975, the number of DDT advisories increased from 58 in 2010 to 67 in 2011. The size of waters under advisory increased slightly.

In 2004, the EPA and the U.S. Food and Drug Administration issued advice for women who might become pregnant, women who are pregnant, nursing mothers, and young children. You can learn more about this advisory here.

For more information on specific advisories within a state, contact the appropriate state agency. For more information on how to reduce exposure, consult the EPA's brochure What You Need to Know About Mercury in Fish and Shellfish, available in several languages. You can also send an email to Samantha Fontenelle (fontenelle.samantha@epa.gov) to learn more about the National Listing of Fish Advisories.