What is the Endocrine System?

Endocrine systems, also referred to as hormone systems, are found in all mammals, birds, fish, and many other types of living organisms. They are made up of:

Why are Hormones Important?

Hormones act as chemical messengers that are released into the blood stream to act on an organ in another part of the body. Although hormones reach all parts of the body, only target cells with compatible receptors are equipted to respond. Over 50 hormones have been identified in humans and other vertebrates.

Hormones control or regulate many biological processes and are often produced in exceptionally low amounts within the body. Examples of such processes include:

Much like a lock and key, many hormones act by binding to receptors that are produced within cells. When a hormone binds to a receptor, the receptor carries out the hormone's instructions, either by altering the cell's existing proteins or turning on genes that will builld a new protein. The hormone-receptor complex switches on or switches off specific biological processes in cells, tissues, and organs.

Some examples of hormones include:

The endocrine system, made up of all the body's different hormones, regulates all biological processes in the body from conception through adulthood and into old age, including the development of the brain and nervous system, the growth and function of the reproductive system, as well as the metabolism and blood sugar levels. The female ovaries, male testes, and pituitary, thyroid, and adrenal glands are major constituents of the endocrine system.

Where are Endocrine Glands Located in the Human Body? 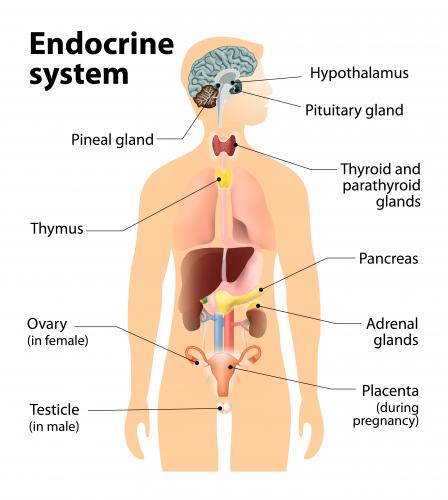 Thyroid gland - The thyroid gland is critical to the healthy development and maturation of vertebrates and regulates metabolism.

Adrenal glands - The adrenal gland is made up of two glands: the cortex and medulla. These glands produce hormones in response to stress and regulate blood pressure, glucose metabolism, and the body's salt and water balance.

Pancreas - The pancreas is responsible for producing glucagon and insulin. Both hormones help regulate the concentration of glucose (sugar) in the blood.

How Can Chemicals Affect the Endocrine System?

Scientific research on human epidemiology, laboratory animals, and fish and wildlife suggests that environmental contaminants can disrupt the endocrine system leading to adverse-health consequences. It is important to gain a better understanding of what concentrations of chemicals found in the environment may cause an adverse effect. Various types of scientific studies (epidemiology, mammalian toxicology, and ecological toxicology) are necessary to resolve many of the scientific questions and uncertainty surrounding the endocrine disruptor issue. Many such studies are currently underway by government agencies, industry, and academia.

Learn more with EDSP about concerns and examples of endocrine disruption.