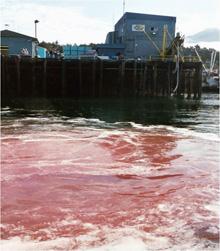 Seafood processing waste discharged into town harbor, Sitka, Alaska.EPA is developing an amendment to the Effluent Limitation Guidelines and Standards (ELGs) for the Canned and Preserved Seafood Category (a.k.a. Seafood Processing; 40 CFR Part 408). EPA plans to issue a final rule, covering the Alaskan seafood processing subcategories, in spring 2017.
On this page: 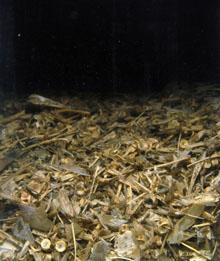 Seafood waste piles up on the seafloor, smothering bottom-dwelling aquatic life. Ketchikan, Alaska.In 1980, the Alaska seafood processing industry sent two petitions to EPA. The first petition asked the Agency to suspend the applicability of effluent limitations for non-remote subcategories set in the ELGs, and the second petition requested a new rulemaking. The effluent limitations at issue were based upon screening technology. In response to the first petition, EPA temporarily suspended the stricter limits for Anchorage, Cordova, Juneau, Ketchikan and Petersburg and instead allowed processors in those areas to use the limits for remote locations based upon grinding. On January 9, 1981, EPA proposed revisions to some of the regulations, while denying most of the industry’s petition. The subcategories included in the proposal were Subparts D, E, F, G, I, J, P, Q, T, AC and AE. The Agency also continued the suspension of the ELGs until it issued a final response to the petition.

EPA sent questionnaires in 2010 to owners and operators of seafood processing facilities in Anchorage, Cordova, Juneau, Petersburg, Dutch Harbor, Ketchikan and the Kenai Peninsula. Supporting analyses were conducted to update the 1981 proposal.

EPA announced the availability of data and information from Alaskan seafood processing facilities and other publicly available sources in 2013. The notice provided EPA's preliminary analyses of the new data and summarized what the Agency learned from the new data and analyses. It provided preliminary results of EPA's analyses of the updated data for the five petition locations as well as preliminary analysis for possible additional locations. Finally, it provided preliminary indications of how these results may be reflected in EPA's final response to petitions submitted in 1980 by certain members of the Alaskan seafood processing industry, and in amended effluent limitations.

The Agency accepted public comments on this information through March 7, 2014. EPA is reviewing the comments received from the notice and is preparing responses.

Information assembled for the 2013 notice, public comments received, and related information are available at regulations.gov. The docket number for the rulemaking is EPA–HQ–OW–2013–0652.