How is the climate changing in the U.S.?

The evidence is clear. Rising global temperatures have been accompanied by changes in weather and climate. Many places have seen changes in rainfall, resulting in more floods, droughts, or intense rain, as well as more frequent and severe heat waves.

The planet's oceans and glaciers have also experienced some big changes – oceans are warming and becoming more acidic, ice caps are melting, and sea levels are rising. As these and other changes become more pronounced in the coming decades, they will likely present challenges to our society and our environment.

What are climate change and global warming?

Global warming refers to the recent and ongoing rise in global average temperature near Earth's surface. It is caused mostly by increasing concentrations of greenhouse gases in the atmosphere. Global warming is causing climate patterns to change. However, global warming itself represents only one aspect of climate change.

Climate change refers to any significant change in the measures of climate lasting for an extended period of time. In other words, climate change includes major changes in temperature, precipitation, or wind patterns, among other effects, that occur over several decades or longer.

Learn more about the signs of climate change in the United States.

Greenhouse gases act like a blanket around Earth, trapping energy in the atmosphere and causing it to warm. This phenomenon is called the greenhouse effect and is natural and necessary to support life on Earth. However, the buildup of greenhouse gases can change Earth's climate and result in dangerous effects to human health and welfare and to ecosystems.

The choices we make today will affect the amount of greenhouse gases we put in the atmosphere in the near future and for years to come.

Learn more about the causes of climate change.

Our lives are connected to the climate. Human societies have adapted to the relatively stable climate we have enjoyed since the last ice age which ended several thousand years ago. A warming climate will bring changes that can affect our water supplies, agriculture, power and transportation systems, the natural environment, and even our own health and safety.

How much you know about the health impacts of climate change? Take our new online quiz and share your score with friends! 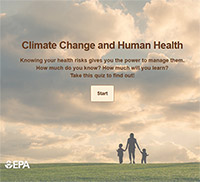 Some changes to the climate are unavoidable. Carbon dioxide can stay in the atmosphere for nearly a century, so Earth will continue to warm in the coming decades. The warmer it gets, the greater the risk for more severe changes to the climate and Earth's system. Although it's difficult to predict the exact impacts of climate change, what's clear is that the climate we are accustomed to is no longer a reliable guide for what to expect in the future.

Learn more about the impacts of climate change and adapting to change.

We can make a difference

You can take action. You can take steps at home, on the road, and in your office to reduce greenhouse gas emissions and the risks associated with climate change. Many of these steps can save you money; some, such as walking or biking to work, can even improve your health! You can also get involved on a local or state level to support energy efficiency, clean energy programs, or other climate programs.

Calculate your carbon footprint and find ways to reduce your emissions through simple everyday actions.

EPA and other federal agencies are taking action. EPA is working to protect the health and welfare of Americans through common sense measures to reduce greenhouse gas pollution and to help communities prepare for climate change.

Learn more about what EPA is doing.