Climate Impacts in the Northwest

The Northwest is best known for its vast Pacific coastline and rainy weather. The region is home to the Cascade Mountain Range that runs north-south through Washington and Oregon, resulting in large climatic differences on the western and eastern sides of the range. West of the mountains, year-round temperatures are mild, winters are wet, and summers are dry. East of the mountains, it is typically sunnier and drier throughout the year, winters are colder, and summers can be significantly hotter.[1]

Over the last century, the average annual temperature in the Northwest has risen by about 1.3°F.[2] Temperatures are projected to increase by approximately 3°F to 10°F by the end of the century, with the largest increases expected in the summer.[2] Precipitation in the region has seen a decline in both the amount of total snowfall and the proportion of precipitation falling as snow. Declines in snowpack and streamflows have been observed in the Cascades in recent decades. In Washington state, record low snowpack values were measured in April 2015 and in seventy-four percent of long-term monitoring stations.[3] Changes in average annual precipitation in the Northwest are likely to vary over the century. Summer precipitation is projected to decline by as much as 30%, with less frequent but heavier downpours.[2]

A reliable supply of water is crucial for energy production, agriculture, and ecosystems. Much of the Northwest's water is stored naturally in winter snowpack in the mountains. The snowpack melts and replenishes streams and rivers in the late spring and summer, when there is very little rainfall. Climate change threatens this natural storage by changing the timing of snowmelt and the amount of water available in streams and rivers (streamflow) throughout the year.[2] Warmer springs contribute to earlier melting of the snowpack, higher streamflows in late winter and early spring, and lower flows in summer. Spring snowmelt is projected to occur three to four weeks earlier by mid-century and summer streamflows are likely to decline.[2] In the Cascade Mountains, measurements of snowpack taken on April 1 (when snowpack is usually at its peak) have decreased by about 20% since the 1950s.[2]

Climate change can also lead to changes in the type of precipitation. Warmer winters cause more precipitation to fall as rain instead of snow, particularly at lower elevations. This reduces soil moisture, snow accumulation, and the amount of water available from snowmelt.[2][4] Further, increased flood risks around rivers that receive waters from both winter rains and peak runoff in late spring are expected.[2]

Changing streamflows are likely to strain water management and worsen existing competition for water. Competing demands for water currently include hydropower, agricultural irrigation, municipal and industrial uses, and protection of ecosystems and threatened or endangered species. Increasing temperatures and populations could deepen demand and further stress urban water supplies that are already at risk of diminishing because of climate change.[2]

Forty percent of the nation's hydropower is generated in the Northwest.[2] Lower streamflows will likely reduce hydroelectric supply and could lead to large economic losses in the region. Reduced streamflows combined with rising temperatures and a growing population are raising concerns about the ability to meet increased air conditioning and other electricity demands.[2] 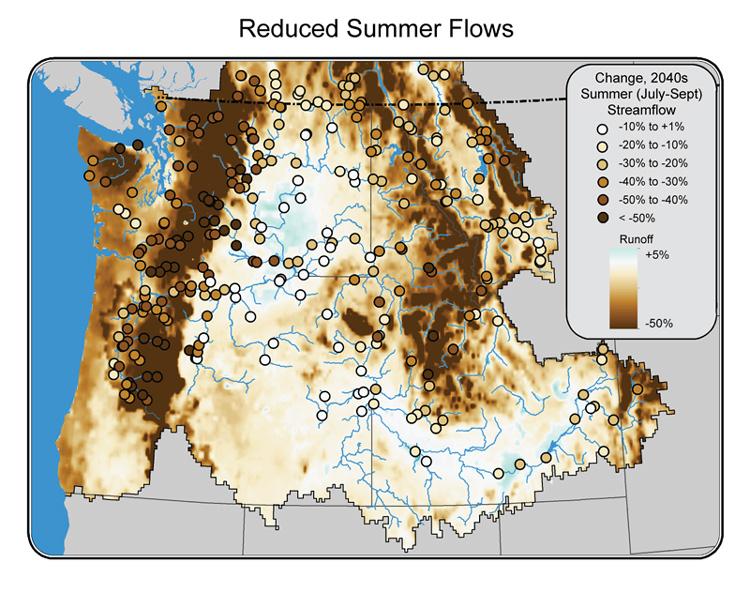 Natural surface water availability during late summer is projected to decline across most of the Northwest. This map shows expected changes in local runoff (shading) and streamflow (colored circles) for the 2040s (compared to the period 1915 to 2006), assuming that heat-trapping greenhouse gases will be reduced in the future. Source: USGCRP 2014[6]

Climate change is damaging the Northwest coastline. Projections indicate an increase of 1 to 4 feet of global sea level rise by the end of the century, which may have implications for the 140,000 acres of the region that lie within 3.3 feet of high tide.[2] Sea level rise and storm surge pose a risk to people, infrastructure, and ecosystems, especially in low lying areas, which include Puget Sound. Warming waters and ocean acidification threaten economically important marine species and coastal ecosystems.[2] 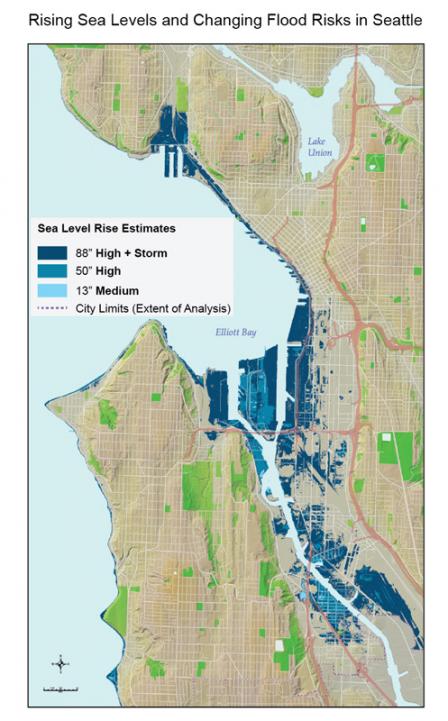 Many areas of Seattle are projected to fall below sea level during high tide by the end of the century. Shaded blue areas depict three levels of sea level rise, assuming no adaptation. The high (50 inches) and medium (13 inches) estimates are within the range of current projections, while the highest level (88 inches) includes the effect of storm surge. Source: USGCRP 2014[6]

Flooding, seawater inundation, and erosion are expected to threaten coastal infrastructure, including properties, highways, railways, wastewater treatment plants, stormwater outfalls, and ferry terminals. Coastal wetlands, tidal flats, and beaches are likely to erode or be lost as a result of seawater inundation, which heightens the vulnerability of coastal infrastructure to coastal storms.

Some coastal habitats may disappear if organisms are unable to migrate inland because of topography or human infrastructure. This is expected to affect shorebirds and small forage fish, among other species. Warmer waters in regional estuaries, including Puget Sound, may contribute to an increase in harmful algal blooms, which could result in beach closures and declines in recreational shellfish harvests. Ocean acidification is also expected to negatively impact important economic species, including oysters and Pacific salmon.

Impacts on Ecosystems and Agriculture

Higher temperatures, changing streamflows, and increases in pests and disease threaten forests, agriculture, and fish populations in the Northwest.[2]

Forests make up nearly half of the Northwest landscape. These areas provide important habitat for fish and wildlife and support local economies, recreation, and traditional tribal activities.[2] Forests have become warmer and drier due to rising temperatures, changes in precipitation, and reduced soil moisture. These stresses make trees more susceptible to insect outbreaks and disease and make forests highly flammable. An increase in the number and size of wildfires has been observed in the region in recent decades.[2] These impacts are expected to worsen in the future, resulting in larger areas burned each year and expanded spread of pests, including the mountain pine beetle. Some types of forests and other ecosystems at high elevations are also expected to disappear from the region by the end of the century from inability to survive changing climatic conditions.[2] These changes are likely to have significant effects on local timber revenues and bioenergy markets. 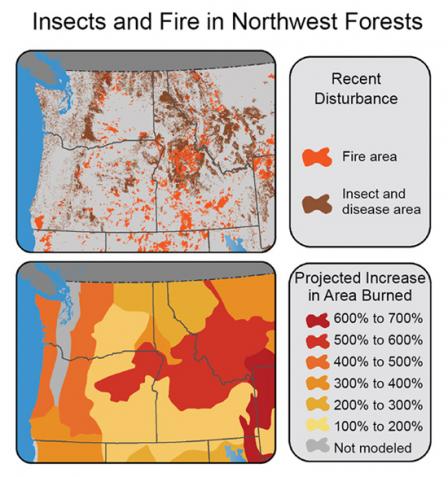 Under hotter, drier conditions, insects and fire can have large cumulative impacts on forests. This is expected to be the dominant driver of forest change in the near future. The top map shows areas burned between 1984 and 2008 or affected by insects or disease between 1997 and 2008. The bottom map indicates the expected increase in area burned resulting from a 2.2°F warming in average temperature. Source: USGCRP 2014[6]

Click the image to view a larger version.Commercial fish and shellfish harvested in the Northwest were valued at $480 million in 2011.[2] Warming waters have already contributed to earlier migration of sockeye salmon in some streams and earlier growth of algal blooms in some lakes. Warmer waters are likely to increase spring and summer disease and mortality in Chinook and sockeye salmon in some river basins. Species that spend all or part of their lives in rivers, including salmon, steelhead, and trout, will suffer from decreased summer flows and increased flooding and winter flows. Projections suggest that suitable habitat for the four trout species in the region will decline by an average of 47% near the end of this century, compared to past decades.[2]

Ocean acidification is also expected to negatively impact shellfish, including oysters, and others species, including Pacific salmon, resulting in economic and cultural implications. Warmer coastal waters may alter migratory patterns and areas of suitable habitat for marine species, resulting in changes in abundances.

Agriculture is an important economic and cultural component in rural areas of the Northwest. In the short-term, a longer growing season and higher levels of atmospheric carbon dioxide may be beneficial to crops.[2] In the longer-term, reduced water availability for irrigation, higher temperatures, and changes in pests, diseases, and weeds may harm crop yields.

Salmon swimming upstream. Credit: US Fish and Wildlife ServiceHuman activities already threaten Northwest salmon populations. These activities include dam building, logging, pollution, and overfishing. Climate change impacts further stress these salmon populations. Salmon are particularly sensitive due to their seasonally timed migration upstream to breed. Higher winter streamflows and earlier peak steamflows due to climate change will damage spawning nests, wash away incubating eggs, and force young salmon from rivers prematurely. Lower summer streamflows and warmer stream and ocean temperatures are less favorable for salmon and other cold-water fish species. These climate change impacts facilitate the spread of salmon diseases and parasites. Many salmon species are already considered threatened or endangered under the Federal Endangered Species Act. Studies show that by 2100, one third of current habitat for Northwest salmon and other coldwater fish will be too warm for these species to tolerate.[5]