Changes in temperature, precipitation, sea level, and the frequency and severity of extreme events will affect how much energy is produced, delivered, and consumed in the United States.

Energy plays an important role in many aspects of our lives. For example, we use electricity for lighting and cooling. We use fuel for transportation, heating, and cooking. Our energy production and use is interconnected with many other aspects of modern life, such as water consumption, use of goods and services, transportation, economic growth, land use, and population growth. Our production and use of energy (most of which comes from fossil fuels) also contributes to climate change, accounting for more than 84% of U.S. greenhouse gas emissions.[1]

Increases in temperature will likely increase our energy demand, as well as change our ability to produce electricity and deliver it reliably. 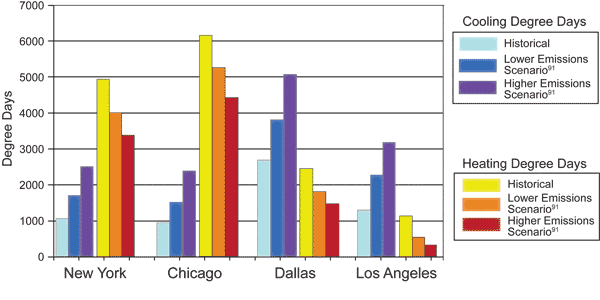 Energy demand is expected to shift by the end of the century. The number of cooling (or heating) "degree days" refers to the sum of the number of degrees that each day's average temperature is hotter (or colder) than 65°F over the course of a year.  As the figure shows, the increase in the number of cooling degree days is expected to be larger than the decrease in number of heating degree days, comparing the historic average and the projected average over the final two decades of this century. Source: USGCRP (2009) 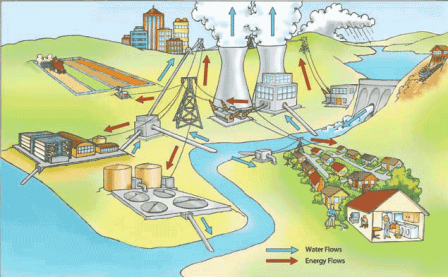 Click the image to view a larger version.Energy and water systems are connected. Energy is needed to pump, transport, and treat drinking water and wastewater. Cooling water is needed to run many of today's power plants. Hydroelectricity (electricity produced by running water) is itself an important source of power in parts of the United States.

Changes in precipitation, increased risk of drought, reduced snowpack, and changes in the timing of snowmelt in spring will influence our patterns of energy and water use. For example:

For more information about the impacts of climate change on water resources, please visit the Water Impacts page. 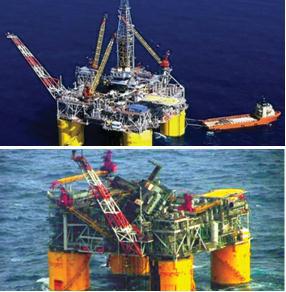 Before and after photographs of the "Mars" offshore drilling and production platform, damaged by Hurricane Katrina in the Gulf of Mexico. Source: CCSP (2008)A large portion of U.S. energy infrastructure is located in coastal areas and therefore sensitive to sea level rise and storm surge. For example, fuel ports and the generation and transmission lines that bring electricity to major urban coastal centers are at risk. Changes in the frequency and severity of storms and other extreme events may also damage energy infrastructure, resulting in energy shortages that harm the economy and disrupt peoples’ daily lives.

For more information about the impacts of climate change on coastal areas, please visit the Coastal Impacts page.

The impacts of climate change on wind and solar power is still a developing area of research due to the challenges involved in modeling wind and cloud cover changes at the necessary spatial scales.