Agriculture and fisheries are highly dependent on the climate. Increases in temperature and carbon dioxide (CO2) can increase some crop yields in some places. But to realize these benefits, nutrient levels, soil moisture, water availability, and other conditions must also be met. Changes in the frequency and severity of droughts and floods could pose challenges for farmers and ranchers and threaten food safety.[3]   Meanwhile, warmer water temperatures are likely to cause the habitat ranges of many fish and shellfish species to shift, which could disrupt ecosystems. Overall, climate change could make it more difficult to grow crops, raise animals, and catch fish in the same ways and same places as we have done in the past. The effects of climate change also need to be considered along with other evolving factors that affect agricultural production, such as changes in farming practices and technology. 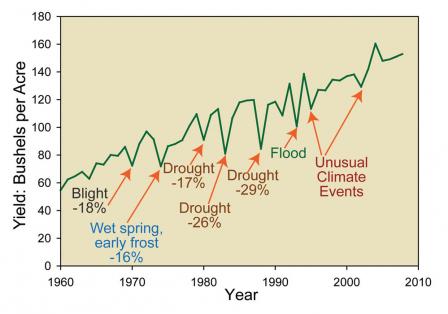 Crops grown in the United States are critical for the food supply here and around the world. U.S. farms supply nearly 25% of all grains (such as wheat, corn, and rice) on the global market.[4] Changes in temperature, atmospheric carbon dioxide (CO2), and the frequency and intensity of extreme weather could have significant impacts on crop yields.

For any particular crop, the effect of increased temperature will depend on the crop's optimal temperature for growth and reproduction.[1] In some areas, warming may benefit the types of crops that are typically planted there, or allow farmers to shift to crops that are currently grown in warmer areas. Conversely, if the higher temperature exceeds a crop's optimum temperature, yields will decline.

Click the image to view a larger version.Americans consume more than 36 million metric tons of meat and poultry annually.[4] Livestock and poultry account for over half of U.S. agricultural cash receipts, often over $100 billion per year.[5] Changes in climate could affect animals both directly and indirectly.

American fishermen catch or harvest five million metric tons of fish and shellfish each year.[7] U.S. fisheries contribute more than $1.55 billion to the economy annually (as of 2012).[8] Many fisheries already face multiple stresses, including overfishing and water pollution. Climate change may worsen these stresses. In particular, temperature changes could lead to significant impacts. 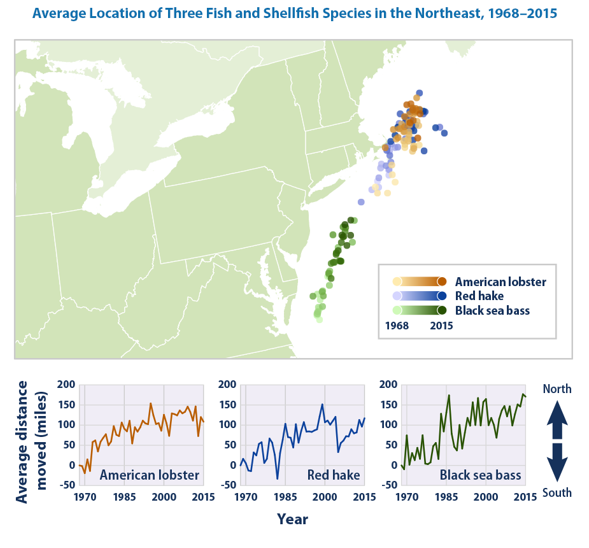 This map shows the annual centers of biomass for three species in the northeastern United States from 1968 to 2015. Dots are shaded from light to dark to show change over time. Source: US EPA (2016). Climate Change Indicators in the United States: Marine Species Distribution. Data Source: NOAA (2016). OceanAdapt.Exit

Click the image to view a larger version.The ranges of many fish and shellfish species may change. In waters off the northeastern United States, several economically important species have shifted northward since the late 1960s. The three species shown in [the figure to the left]  (American lobster, red hake, and black sea bass) have moved northward by an average of 119 miles. [9]

In addition to warming, the world's oceans are gradually becoming more acidic due to increases in atmospheric carbon dioxide (CO2). Increasing acidity could harm shellfish by weakening their shells, which are created by removing calcium from seawater. [10] Acidification also threatens the structures of sensitive ecosystems upon which some fish and shellfish rely. [1],[13] 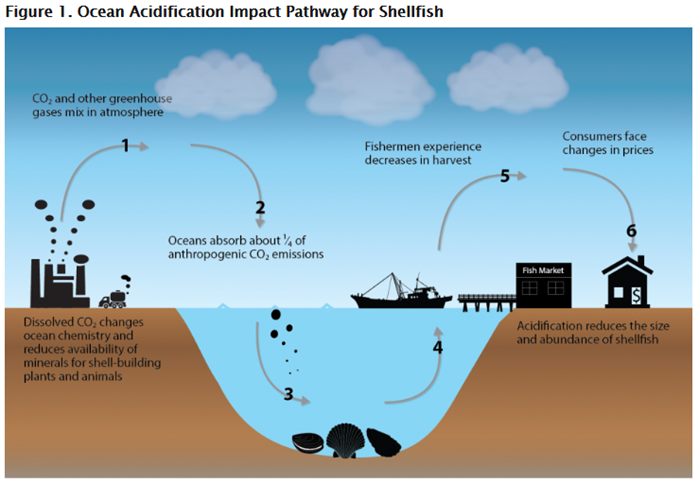 This diagram shows the impact pathway of carbon dioxide emissions on the shellfish market.  Carbon dioxide is absorbed by oceans, resulting in ocean acidification. Acidification reduces the size and abundance of shellfish, which in turn leads to decreased harvest and eventually to changes in prices for consumers. Source: US EPA (2015). Climate Change in the United States: Benefits of Global Action

Climate change is very likely to affect food security at the global, regional, and local level. Climate change can disrupt food availability, reduce access to food, and affect food quality.[14]  For example, projected increases in temperatures, changes in precipitation patterns, changes in extreme weather events, and reductions in water availability may all result in reduced agricultural productivity. Increases in the frequency and severity extreme weather events can also interrupt food delivery, and resulting spikes in food prices after extreme events are expected to be more frequent in the future.  Increasing temperatures can contribute to spoilage and contamination.

Internationally, these effects of climate change on agriculture and food supply are likely to be similar to those seen in the United States. However, other stressors such as population growth may magnify the effects of climate change on food security. In developing countries, adaptation options like changes in crop-management or ranching practices, or improvements to irrigation are more limited than in the United States and other industrialized nations.

Any climate-related disturbance to food distribution and transport, internationally or domestically, may have significant impacts not only on safety and quality but also on food access. For example, the food transportation system in the United States frequently moves large volumes of grain by water. In the case of an extreme weather event affecting a waterway, there are few, if any, alternate pathways for transport.  High temperatures and a shortage of rain in the summer of 2012 led to one of the most severe summer droughts the nation has seen and posed serious impacts to the Mississippi River watershed, a major transcontinental shipping route for Midwestern agriculture. This drought resulted in significant food and economic losses due to reductions in barge traffic, the volume of goods carried, and the number of Americans employed by the tugboat industry. The 2012 drought was immediately followed by flooding throughout the Mississippi in the spring of 2013, which also resulted in disruptions of barge traffic and food transport.[3]  Transportation changes such as these reduce the ability of farmers to export their grains to international markets, and can affect global food prices.

Impacts to the global food supply concern the United States because food shortages can cause humanitarian crises and national security concerns.  They also can increase domestic food prices.

[2] USDA (2016). Economic Research Service, undated. What is Agriculture’s Share of the Overall US Economy?

[13] US EPA (2015). Climate Change in the United States: Benefits of Global Action: Shellfish.