Increasing greenhouse gas concentrations will have many effects

Greenhouse gas concentrations in the atmosphere will continue to increase unless the billions of tons of our annual emissions decrease substantially. Increased concentrations are expected to:

These changes will impact our food supply, water resources, infrastructure, ecosystems, and even our own health.

Future changes will depend on many factors

Scientists use computer models of the climate system to better understand these issues and project future climate changes.

Because it is difficult to project far-off future emissions and other human factors that influence climate, scientists use a range of scenarios using various assumptions about future economic, social, technological, and environmental conditions. 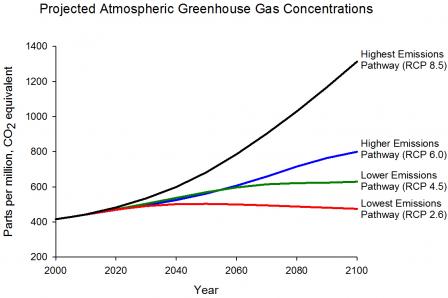 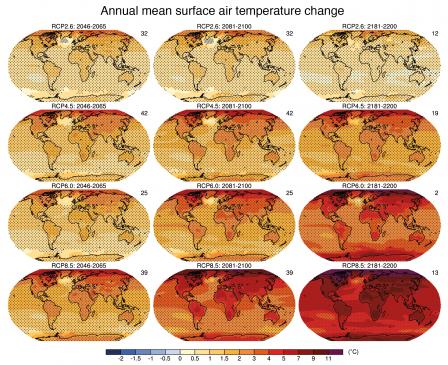 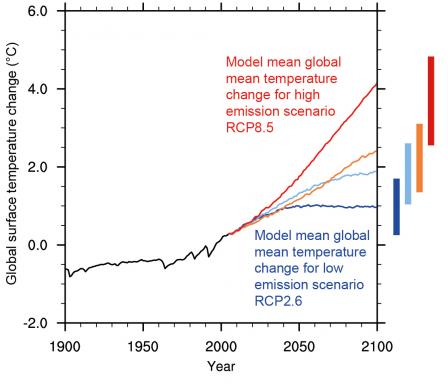 Observed and projected changes in global average temperature under four emissions pathways. The vertical bars at right show likely ranges in temperature by the end of the century, while the lines show projections averaged across a range of climate models. Changes are relative to the 1986-2005 average. Source: IPCC, 2013 Exit, FAQ 12.1, Figure 1. 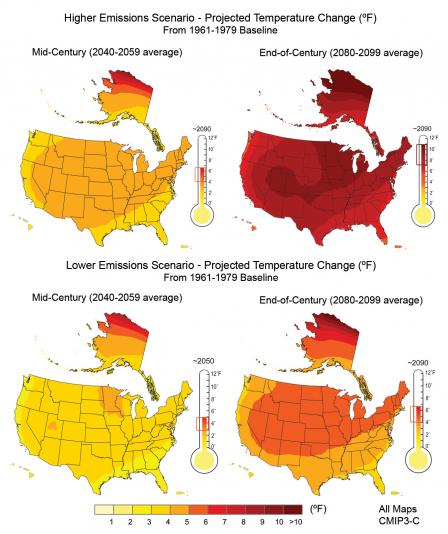 Projected temperature change for mid-century (left) and end-of-century (right) in the United States under higher (top) and lower (bottom) emissions scenarios. The brackets on the thermometers represent the likely range of model projections, though lower or higher outcomes are possible. Source: USGCRP (2009) 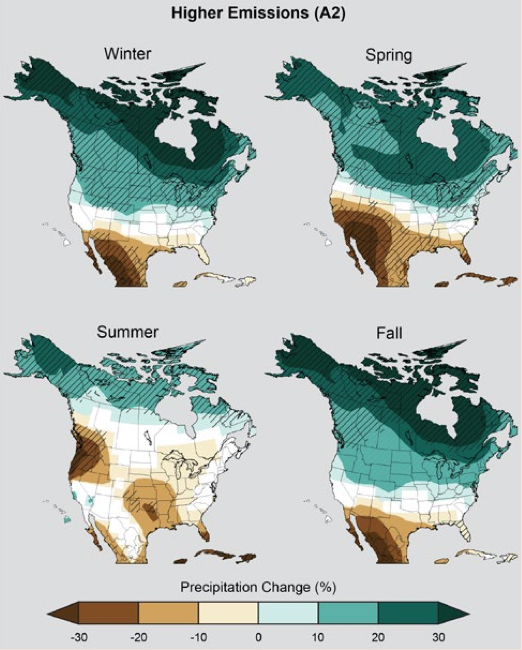 The maps show projected future changes in precipitation for the end of this century, compared with 1970-1999, under a higher emissions scenario. For example, in winter and spring, climate models agree that northern areas in the United States are likely to get wetter and southern areas drier. There is less confidence in exactly where the transition between wetter and drier areas will occur. Confidence in the projected changes is highest in the areas marked with diagonal lines. The changes in white areas are not projected to be larger than what would be expected from natural variability. Source: U.S. National Climate Assessment, 2014.

Arctic sea ice is already declining.[2] The area of snow cover in the Northern Hemisphere has decreased since about 1970.[2] Permafrost temperatures in Alaska and much of the Arctic [2] have increased over the last century.[1] To learn more about recent changes in snow and ice, visit the Snow and Ice page of the Indicators section. 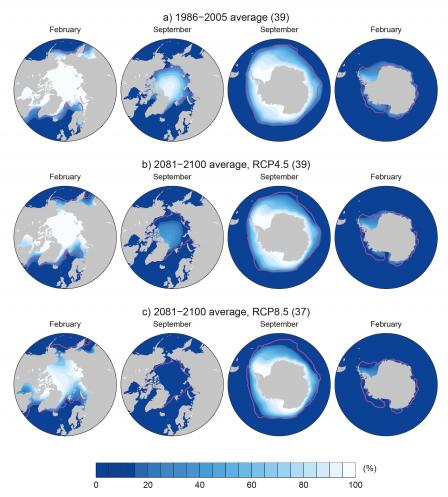 These maps show projected losses of sea ice in the Arctic and Antarctica. The maps in a) show the average ice concentration (the relative area covered by sea ice) from 1986-2005. The maps in b) and c) show climate model simulations of sea ice thickness in February and September near the end of the 21st century under low (b) and high (c) emission scenarios. In the Arctic, February is projected to have less ice (more blue); September is projected to be nearly ice-free (almost all blue). The projected changes in Antarctic sea ice are more subtle. Source: IPCC, 2013 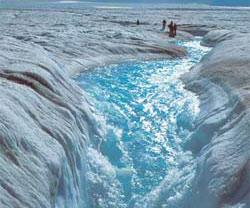 Meltwater flowing from the Greenland ice sheet Source: NASAWarming temperatures contribute to sea level rise by: expanding ocean water; melting mountain glaciers and ice caps; and causing portions of the Greenland and Antarctic ice sheets to melt or flow into the ocean.[3]

Since 1870, global sea level has risen by about 7.5 inches.[2] Estimates of future sea level rise vary for different regions, but global sea level for the next century is expected to rise at a greater rate than during the past 50 years.[2] Studies project global sea level to rise by another 1 to 4 feet by 2100, with an uncertainty range of 0.66 to 6.6 feet.[1]

The contribution of thermal expansion, ice caps, and small glaciers to sea level rise is relatively well studied, but the impacts of climate change on ice sheets in Greenland and Antarctica are less understood and represent an active area of research. Changes in ice sheets are currently expected to account for 1.2 to 8 inches of sea level rise by the end of this century.[3] 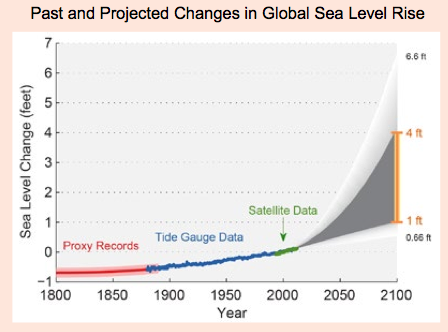 Past and projected sea level rise from 1800 to 2100. The orange line at right shows the currently projected range of sea level rise of 1 to 4 feet by 2100; the wider range (0.66 feet to 6.6 feet) reflects uncertainty about how glaciers and ice sheets will react to climate change. Source: NCA, 2014.

Ocean acidification adversely affects many marine species, including plankton, mollusks, shellfish, and corals. As ocean acidification increases, the availability of calcium carbonate will decline. Calcium carbonate is a key building block for the shells and skeletons of many marine organisms. If atmospheric CO2 concentrations double, coral calcification rates are projected to decline by more than 30%. If CO2 concentrations continue to rise at their current rate, the combination of climate warming and ocean acidification could slow coral growth by nearly 50% by 2050.[5] 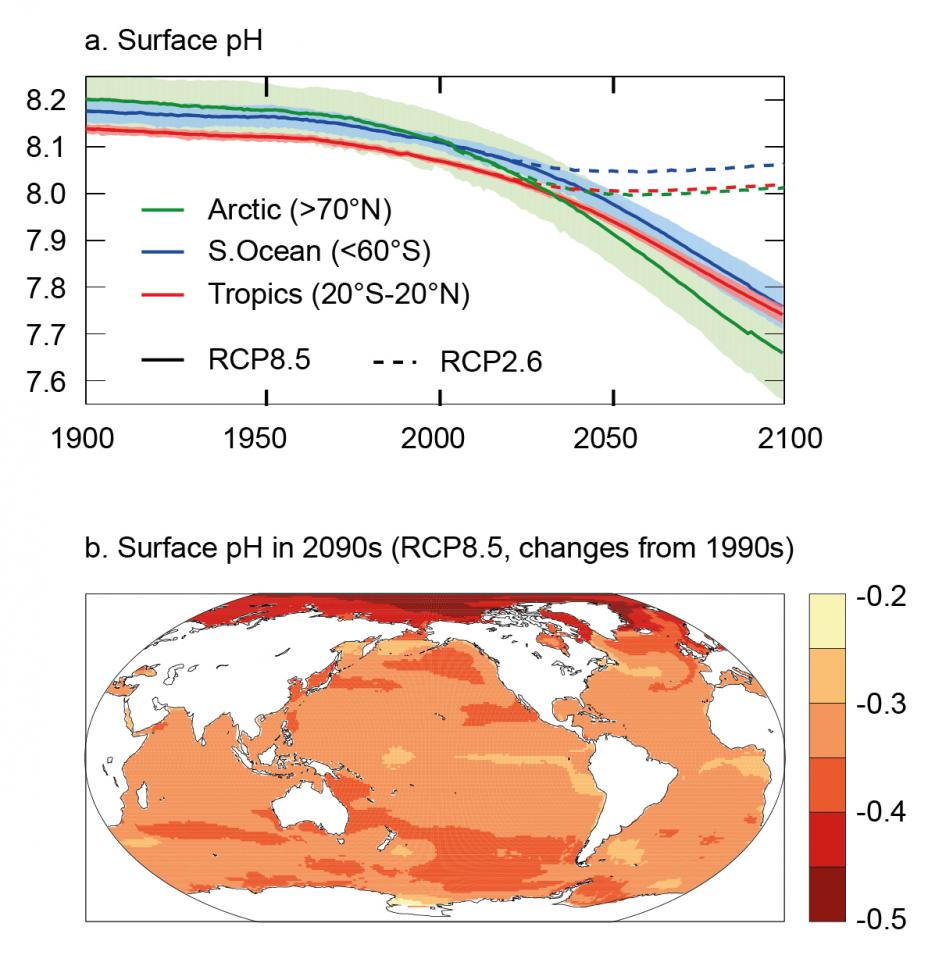 Oceans become more acidic as carbon dioxide (CO2) emissions in the atmosphere dissolve in the ocean. This change is measured on the pH scale, with lower values being more acidic. The pH level of the oceans has decreased by approximately 0.1 pH units since pre-industrial times, which is equivalent to an approximately 30% increase in acidity. As shown in the graph and map above, the pH level of the oceans is projected to decrease even more by the end of the century as CO2 concentrations are expected to increase for the foreseeable future.[1][2] Source: IPCC, 2013, Chapter 6.

Scientists have varying degrees of confidence in the assessment and projection of climate change impacts.

Scientists are confident that humans are contributing significantly to observed warming
Measurements collected by scientists are sufficiently accurate to describe large-scale changes in climate that have occurred, including changes in temperature over the last century. Although it is difficult to say exactly how much warming was caused by humans, many lines of evidence support the conclusion that human activities have caused most observed warming over at least the last several decades.

Confidence varies by geographic scale
Global climate models generally provide consistent and reliable simulations of climate variables only at large continental to global scales. This is because the variability of the climate increases at smaller geographic and shorter temporal scales. Additionally, the grid cells of the models are usually more than 60 miles (100 km) wide, which is larger than important features that matter for local climate like mountains and land cover. Global models and regional techniques are starting to provide useful information about climate changes on local to regional scales. While some of these projections are very well understood, others are more speculative. Generally, confidence decreases as one moves from larger scales to smaller scales. Regional climate modeling is an active area of research to improve our ability to project future changes at smaller spatial scales.

Confidence varies by climate variable
Scientists are more confident in estimates of some climate variables than others. For example, changes in precipitation are more difficult to project than changes in temperature. To accurately estimate precipitation changes, models must correctly project a number of underlying processes, like evaporation, that occur on relatively small spatial scales. Moreover, precipitation is strongly influenced by mountainous terrain and other local or regional geographic features, which are not always well represented in current models. Despite the complexities, some projections and conclusions, particularly at the continental to global scales, can be made.