Map of the Chesapeake Bay Watershed.  The watershed encompasses six states and the District of Columbia.

Driving Actions to Clean Local Waters and the Chesapeake Bay

Despite extensive restoration efforts during the prior 25 years, the TMDL was prompted by insufficient progress and poor water quality in the Chesapeake Bay and its tidal tributaries. The TMDL was required under the federal Clean Water Act and responded to consent decrees in Virginia and the District of Columbia from the late 1990s. It was also a keystone commitment of a federal strategy to meet President Barack Obama’s Executive Order to restore and protect the Bay.

The TMDL is the largest ever developed by EPA, encompassing a 64,000-square-mile watershed. The TMDL identifies the necessary pollution reductions from major sources of nitrogen, phosphorus and sediment across the Bay jurisdictions and sets pollution limits necessary to meet water quality standards. Bay jurisdictions include Delaware, Maryland, New York, Pennsylvania, Virginia, West Virginia and the District of Columbia. 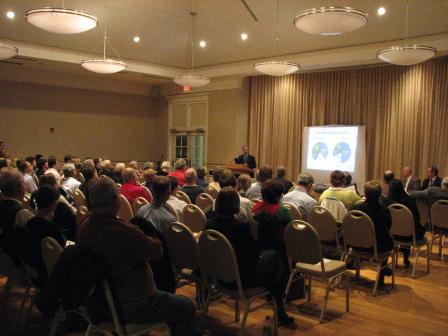 Public meeting held in Williamsburg, Virginia during the development of the Chesapeake Bay TMDL.The pollution limits were further divided by jurisdiction and major river basin based on state-of-the-art modeling tools, extensive monitoring data, peer-reviewed science and close interaction with jurisdiction partners. The TMDL is designed to ensure that all pollution control measures needed to fully restore the Bay and its tidal rivers are in place by 2025. The TMDL also calls for practices to be in place by 2017 to meet 60 percent of the overall nitrogen, phosphorus and sediment reductions.

The final TMDL was shaped by an extensive two-year public involvement effort and, in large part, by final Phase I Watershed Implementation Plans (WIPs). The Phase I WIPs were developed by the jurisdictions and detailed how and when the jurisdictions would meet pollution allocations.

The TMDL also included targeted “backstop allocations” for areas where the WIPs did not meet the allocations or EPA’s expectations of reasonable assurance that those allocations would be met. These areas required a plan for enhanced oversight and contingency actions to ensure progress.

Also, EPA committed to reducing air deposition of nitrogen to the tidal waters of the Bay from 17.9 to 15.7 million pounds per year through federal air regulations.

The Chesapeake Bay TMDL is unique because of the extensive measures EPA and the jurisdictions have adopted to ensure accountability for reducing pollution and meeting deadlines for progress. The accountability framework includes the WIPs, two-year milestones, EPA’s tracking and assessment of restoration progress and specific federal actions if the jurisdictions do not meet their commitments. 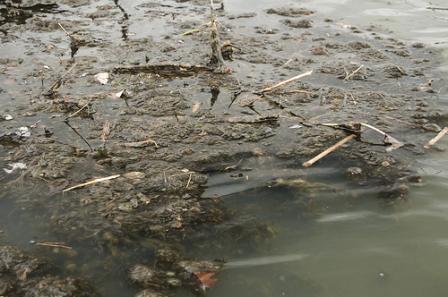 Algae and debris on the surface of the Susquehanna River, which flows into the Chesapeake Bay.

A TMDL is the calculation of the maximum amount of pollution a body of water can receive and still meet state water quality standards. Water quality standards are designed to ensure waterways meet a national primary goal of being swimmable and fishable.  When the TMDL was established, monitoring data continued to show that the Bay had poor water quality, degraded habitats and low populations of many species of fish and shellfish.

The Bay and its rivers are overweight with nitrogen, phosphorus and sediment from agricultural operations, urban and suburban runoff, wastewater, airborne contaminants and other sources.  The excess nutrients and sediment lead to murky water and algae blooms, which block sunlight from reaching and sustaining underwater Bay grasses. Murky water and algae blooms also create low levels of oxygen for aquatic life, such as fish, crabs and oysters. 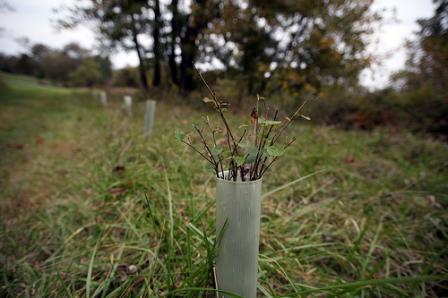 Actions under the TMDL will also have significant benefits far beyond the Chesapeake Bay itself. Benefits include helping to clean rivers and other waterways that support local economies and recreational pursuits like fishing and swimming, and serve as drinking water sources.

In 2012, the jurisdictions submitted Phase II Watershed Implementation Plans designed to strengthen the initial cleanup strategies and reflect the involvement of local partners. They also submitted sets of two-year milestones in 2012 and 2014 outlining near-term restoration commitments. Phase III WIPs in 2017 will be designed to provide additional detail of restoration actions beyond 2017 and to ensure that the 2025 goals are met.

To view this fact sheet in PDF format, please click the link below: