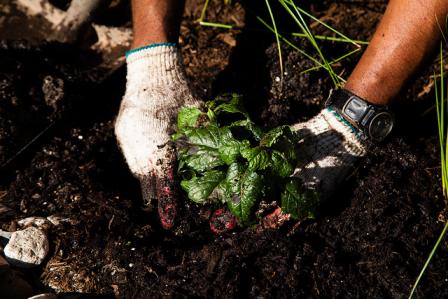 Planting rain gardens is just one of many best management practices (BMPs) included in two-year milestones to restore the Chesapeake Bay.
EPA and the Bay jurisdictions have adopted extensive measures to ensure accountability for reducing pollution and meeting target dates for progress under the Chesapeake Bay TMDL. Bay jurisdictions include Delaware, Maryland, New York, Pennsylvania, Virginia, West Virginia and the District of Columbia. The TMDL is being implemented using an accountability that guides restoration efforts.

As part of this accountability framework, EPA and the Bay jurisdictions agreed to develop short-term goals, called milestones, to increase restoration work and ensure progress. The two-year milestones represent key check-in points on the way to having all pollution reduction measures in place by 2025 to restore the Bay and its tidal rivers. By 2017, controls should be in place that would achieve 60 percent of the necessary pollutant reductions.

In the past, the Chesapeake Bay Program (CBP) partnership had set one overall pollution reduction goal for cleaning up the Bay a decade or more in the future. The CBP partnership found these long term goals difficult to meet and decided to identify short term goals needed to make steady progress. Two-year milestones provide greater specificity of load reductions, more rigorous assurances that load reductions will be achieved, and more transparent reporting to the public.

In addition, federal agencies contribute to the restoration of the Chesapeake Bay watershed through implementation of the federal strategy called for in Executive Order 13508. Federal agencies, including EPA, set two-year milestones with the specific charge of taking actions that directly support the jurisdictions in restoring water quality.

If you are seeking additional information on the jurisdiction-developed two-year milestones, please contact one of the jurisdiction staff members listed in the table below.