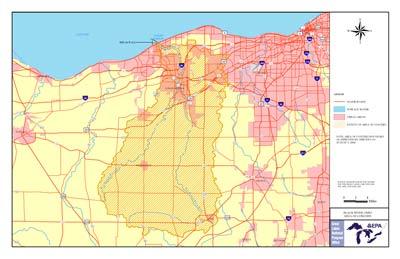 The Black River is in northern Ohio. In June 2015, the boundary of the Black River AOC was modified. The geographic extent is the entire Black River mainstem from Lorain to Elyria, the French Creek watershed, the Outer Harbor, and the nearshore of the Lake Erie area including two Lake Erie beaches, Lakeview Park Beach and Century Park Beach.

Discharges from the many industrial operations on the lower river contaminated river sediments with heavy metals and polynuclear aromatic hydrocarbons (PAHs) from a now closed steel mill coking operation. The river’s aquatic habitats and fish communities were severely impacted.

Impairments to the River

The long history of industrial, agricultural and urban uses to which the Black River was subjected has left its mark. Like most rivers that flow through or near the industrial heartland of the US, the Black River has been subjected to a variety of uses. Rivers were suppliers of water, agents of commerce but ultimately unfortunate receptors of and conduits for wastes.