About the Acting Regional Administrator for EPA Region 5 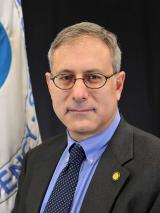 Robert A. KaplanRobert (Bob) A. Kaplan is Acting Regional Administrator for the U.S. Environmental Protection Agency’s Region 5 office in Chicago. He implements federal environmental programs in the Great Lakes states of Illinois, Indiana, Michigan, Minnesota, Ohio and Wisconsin, as well as 35 federally recognized tribal governments. Region 5 has 1150 employees in Chicago and throughout the Region.

Bob received DOJ’s 2014 John Marshall Award for Outstanding Legal Achievement and the 2014 Presidential Rank Award. Originally from Boston, he is a graduate of Carleton College and the University of Pennsylvania Law School.  He now lives in Chicago with his wife Kimberly and daughter Sarah, age 6.